I thought it important to cover a topic that during this meeting, turns out, is to be wildy popular: caffeine. To date, there appears to be very little evidence that suggests a lot of negative effects of caffeine. I have read that the more coffee you drink, the longer you live. Heck, even caffeine is recommended before a workout because it increases calcium uptake into muscles and improves contractility. So, when I read the abstract for Dennis Fitzgerald's nanosymposium on caffeine downregulating the mTORC1 pathway, I thought it would be a nice addition to my caffeine 'theme' that seems to be ever-relevant—especially for those in science.

Dennis, a member of Ewan McNay's lab at University of Albany became interested in the lab after being introduced to it by the president of the neuroscience club at the college, Gregory Moy. At the time Dennis had joined the lab, Gregory discovered that caffeine upregulated brain-derived neurotrophic factor (BDNF), and during Dennis' work in the lab he—to use Dennis' words—had the serendipitous discovery that caffeine interacts with mTOR complex. A discovery driven by Dennis' interest to understand how BDNF regulated cellular pathways downsteam of the BDNF receptors (TrkB & p75). In the years leading up to this discovery, Dennis had read in Scientific American that the mTOR pathway was relevant to all facets in learning and memory. For example, in Alzheimer's disease, it has been suggested that mTOR signaling has become dysregulated in hippocampus leading to the impairments in learning and memory that are hallmarks of the disease. The key finding that Dennis was most interested in was that caffeine downregulated a signaling partner of the mTOR complex pathway: p70s6k. This is because in certain neurodegenerative conditions, p70s6k is upregulated and therefore, suppressing its activity with caffeine may allow for the potential therapeutic action of caffeine in these conditions. Dennis and his lab graciously provided me with the figure below that was the 'steak' of the presentation he gave at the Nanosymposium on learning and memory. 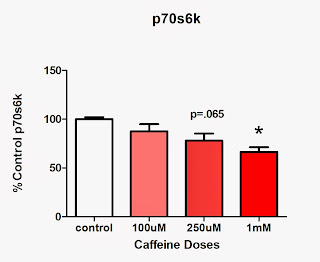 The data from this figure shows that, in hippocampal cultures exposed to increasing doses of caffeine, p70s6k is downregulated in a dose-dependent, inverse fashion. Although, as Dennis pointed out, the dose of 1 mM is extremely high but in conditions like Alzheimer's, where p70s6k is present at pathologically high levels, caffeine's action may be highly efficacious. Naturally, this research would be interesting to extend to in vivo models of neurodegenerative disorders, including Alzheimer's disease but, it would be also interesting to study chronic administration of caffeine to a hippocampal culture. Dennis suggested that, in 'normal' individuals, excessive levels of caffeine might be pathological in terms of learning and memory function, but these would be at extremely high doses, and in almost a steady-state system due to chronic administration.

I thought this would be an interesting presentation to listen to for another reason. Dennis is an undergraduate student in Ewan McNay's lab. For context, Dennis presented at what is referred to as a 'Nanosymposium'. This is basically a small part of the meeting that contains numerous short powerpoint presentations on highly focused topics. Many doctoral students, doctoral candidates, and neuroscientists of higher ranks typically request to give a talk versus a poster but are probably not selected as much as they'd like. So, the caliber of work is likely excellent when an undergraduate neuroscientist is presenting at a nanosymposium. And, indeed, I found Dennis to be highly competent and knowledgeable concerning the background of his field. On a personal note, Dennis is a senior in his undergraduate program and is aiming to attend a SUNY medical school in upstate New York. Although he will not continue research in Ewan McNay's lab, he hopes to continue research following the completion of his medical degree.
Posted by NeuroscienceDC at 6:50 PM