We are constantly hearing about 3D printing in the media. Whether people are making 3D-printed cars, guns, or even organs, this technology is becoming wild with the thousands of different applications. My new favorite: a 3D printed brain.

A hemispherectomy is a [scary] surgical procedure in which an entire hemisphere of your brain is either entirely removed, partially removed, or surgically disconnected (termed: functional hemispherectomy because all electrical influence of the diseased hemisphere is removed) from a healthy hemisphere in order to protect the healthy brain from damage (picture below is an example brain scan of a 7-year old girl who underwent the procedure, note what is missing!). 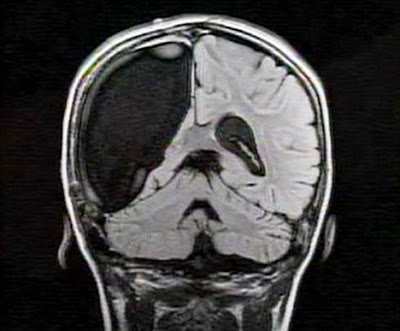 The removed or disconnected hemisphere is epileptic and damaging the healthy hemisphere of the brain. I have always found this procedure to be so barbaric but also astonishing at the same time. An entire half of your brain is removed! Unfortunately, this is currently one of the only effective treatments for such intractable epilepsies. But, what is so phenomenal about this is that not only do patients not present with any long-term deficits in language or intelligence, their IQ often improves. On average there is an increase of 10 IQ points!

Before I get into what all of these results mean in terms of the implications of brain function and its amazing plastic nature, I want to review some of the basic neuroanatomy that is truly incredible with human brains. Gyrencephalic brains (of which human brains are included) are often considered to be more ‘complex’ and contain a vast number of folds to obtain the surface area required for their high neuron count. Lissencephalic or ‘smooth’ brains are often observed in animals that are considered to be more primitive (e.g. rodent brains) in nature and have lower neuron counts since the brain does not need the surface area to accommodate for an increased number of neurons. Now, why is this important? Brain tissue is incredibly weak! It’s really hard to convey this idea to people who haven’t held an unfixed brain. And, this is important for part of the story later when I talked about how the tissue is actually removed. Here is a good example of an unfixed human brain:

Watch this video because it is pretty incredible; it is a demonstration of a human brain being handled immediately following its removal during an autopsy. It is important to understand how weak the brain is because if the brain were resting on any part of your skull, it would be damaged. As you can see in this video demonstration, just from having an unfixed human brain set on a table, it has deformed the tissue and compressed it immediately. So, how does the brain stay undamaged inside of the skull? Cerebrospinal fluid typically ‘floats’ the brain and this prevents it from being damaged. And, in order to prevent the cerebral hemispheres from crashing into each other or the cerebellum, we have evolved some incredible structures that are rarely covered in introductory neuroanatomy courses.

Inside the human skull we have what are called the falx cerebri (pictured below), a structure typically present within the skulls of species that possess gyrencephalic brains. These incredible extensions of the dura mater, a protective covering of brain tissue, plunge down in between the cerebral hemispheres to block them from damaging each other. An additional projection extends from the skull wall to separate the hemispheres from the cerebellum. These structures are so rigid that during an extreme trauma such as a car accident or a blast-traumatic brain injury, the rotational forces generated can cause the brain matter to contact the falx cerebri and sheer the brain tissue like a hot knife through warm butter. Brain tissue is that weak. Now, imagine the incredible task of the neurosurgeon. In the more commonly performed modern procedure, the functional hemispherectomy, the neurosurgeon must navigate and sever all connections of epileptic hemisphere from the healthy half of your brain. As I am sure you can imagine, an incredible number of complications are associated with this surgical procedure given the construction of the inside of the human skull. The entire skull cannot be removed and several sites are required to be severed in order to obtain complete functional disconnection of the unhealthy hemisphere. Normally, this is done with some mapping by a magnetic resonance imager but, in some ways, one might argue the operation is done somewhat blindly as there are enough individual variations in brain anatomy to cause problems. 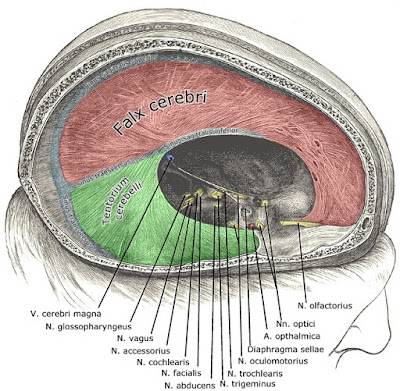 On September 3rd, The Verge reported the incredible story of Gabriel Mandeville. At the age of 5 months, Gabriel started experiencing incredibly debilitating seizures and they only continued to get worse. After several treatment attempts failed, Gabriel’s neurologists quickly decided the only treatment option was a functional hemispherectomy. Understanding the incredible risk associated with this surgery, Boston Children’s hospital had a 3D printer replicate Gabriel’s brain to give the surgeon a practice run. Part of a growing program at Boston Children’s and Harvard’s Hospital, the Pediatric Simulator Program (called SIMPeds: http://simpeds.org/) creates extensive simulations for various procedures to allow physicians and surgeons to practice these operations in advance of the real thing. A variety of 3D printed objects are being produced to simulate more common procedures and for those as rare as the hemispherectomy performed by Gabriel’s neurosurgeons.

The happy ending to this story is that Gabriel is now seizure free. But, I still haven’t hit the nail on the head as to why I think this is an incredible story that gives us such powerful information about the brain. An entire half of a brain is either completely or partially removed during this uncommon surgical procedure. It seems that either through abnormal development, perhaps due to the presence of the diseased hemisphere, the healthy hemisphere is able to take over seemingly all of the functions of the diseased hemisphere. Again, further demonstrating that the neuromyth that we have hemispheric dominance is not true (if the myth were true all of the functions associated with some particular hemisphere should be completely lost). It’s almost hard to believe that we can still do so much with that much loss. Even further, the average improvement in IQ by 10 points is remarkable and suggests that the diseased hemisphere was almost putting some kind of brake or training wheels on the healthy one and hindering its normal function.

The brain is truly the most remarkable organ. For most people, it might seem impossible that our brains could adapt to such a trauma but it prevails for reasons we are far from completely understanding. A fact that makes this field so exciting; so much is left to be learned. 3D printed ‘practice brains’ are making this procedure far safer and a more viable option to let the healthy brain do what its designed to do best during development: thrive.